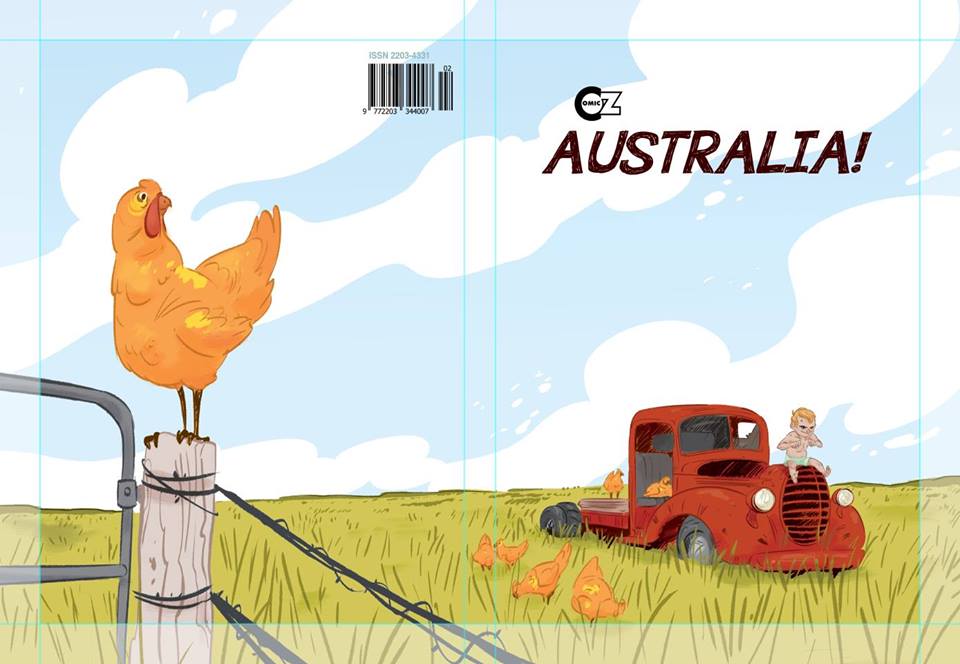 Art: Lesley Vamos. Design: This was an earlier image... the final cover looks MOSTLY like this, with some variations.....
Featured above is the cover artwork to one of two hard-cover coffee table books just released by Comicoz.  Titled simply Australia! this volume has been made with the express purpose of raising funds for beyondblue, the Australian charity that seeks to reduce the impact of depression and anxiety in our communities.
For each copy sold, $10 will be donated to beyondblue. Inside this 124 page book you will find a collection of Australian comic stories by some of our country's best artists and cartoonists; each one of who freely contributed their time and effort to the publication.
In total, more than thirty contributors took part in the production of this volume, with stories ranging from one page in length to five page comic book masterpieces. Some of the contributors had not even drawn comic stories for over twenty years! Lesley Vamos' artwork graces the cover (see above).
Inside you will find a whole variety of differing stories: some in black and white, some in colour. The book presently is only available on the Store tab (click here) of this Comicoz webpage, retailing for only $35 (which includes all postal and packing charges AND the $10 donation to beyondblue). 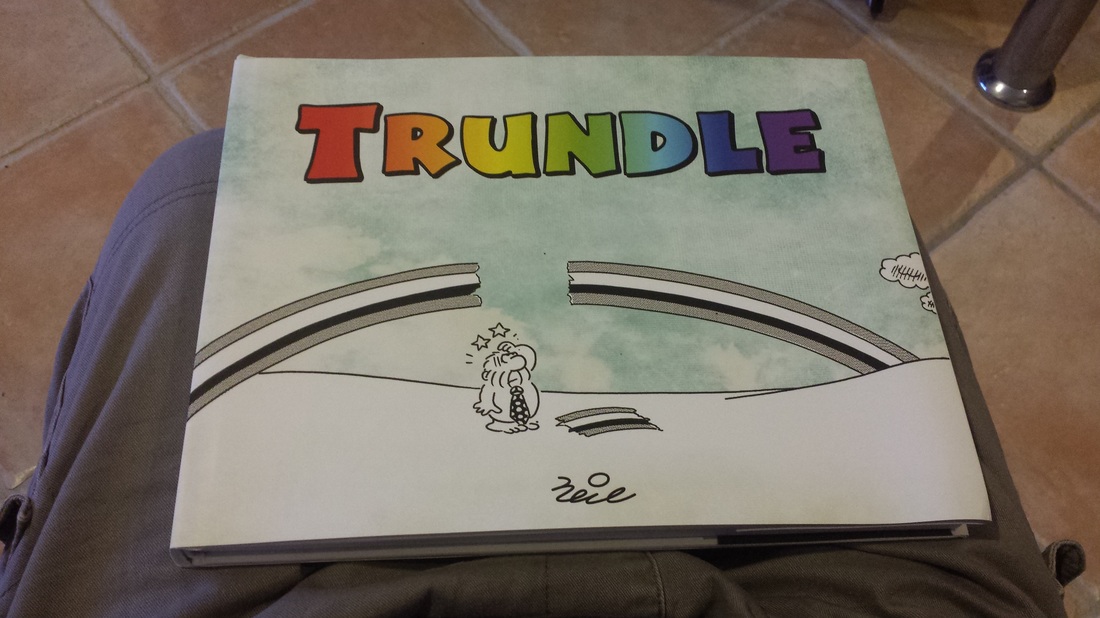 Art: Copyright Neil Matterson; Design: Ryan McDonald-Smith
The second hard-cover high-quality book to be released by Comicoz is the reprinting of a comic strip by well-known Australian cartoonist Neil Matterson, featuring one of his little-known works. Trundle is a gentle, mostly forgotten feature that was published in few newspapers in the late 1980s for a brief fourteen month period. What sets it apart from most comic strips (both today and in its day), is the fact that it is a pantomime strip that relies solely on its protagonist (Trundle) and his interaction with his world.
This book is an incredible record of a cartoonist at the height of his craft. Whilst not pretending to be a complete run of Trundle, included in the 170 pages, are nine Sunday strips of the feature that have never before been published. Neil Matterson has also written a 14 page personal reflection especially for the book. This is a fascinating read, as it allows the reader a rare opportunity to delve into the mind of one of the best of Australia's modern comic strip cartoonists. Among the topics he covers are his thoughts on his youth, his past influences, his thoughts on his creative process and the limitations of his Trundle strip.
This black and white Trundle collection can be enjoyed by Australian of all ages. An attempt will be made to seek out a book distributor, so that it obtains the wider audience it deserves. Presently, it is also only available from the Store tab (click here) on this Comicoz webpage. It retails for only $35 (which includes all postal and packing charges).

If you would like to save money, click on the Store tab and order both of these books today for $55, including postage and packing AND the $10 donation to beyondblue !! 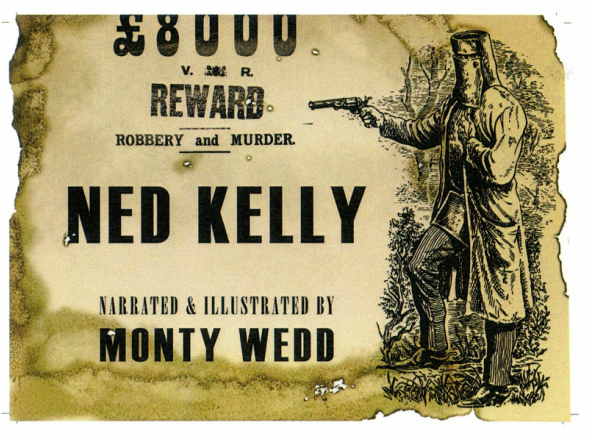 Bronze Ledger Award WINNER! ("For excellence in Australian Comics and Publishing", at the ceremony held on April 10th 2015 at the State Library of Victoria.)

NED KELLY, Narrated and Illustrated by MONTY WEDD is the complete collection of the weekly newspaper strip that ran in many Australian newspapers in the mid-1970s. Lovingly restored from the original artwork on high quality paper stock, hardback with dust jacket, in a large 36 cm width x 26 cm depth hardback, with dust jacket. "The Best Looking Australian Comic-Related Reprint Book EVER."

The book was produced with the full cooperation of Monty Wedd's Family. The cover (pictured at left) was designed by Michal Dutkiewicz. Some addition (external) design assistance was given by his brother, Dr Adam Dutkiewicz. Internal design by Ryan McDonald-Smith.

The book was delayed in seeing print, mostly because Publisher and Project Coordinator Nat Karmichael was being particularly fussy about quality control.

The review of the book in The Weekend Australian on May 17-18th 2014 said: "Wedd's lucid, meticulously researched narrative is never less than engaging, while his sharp visuals and densely detailed storytelling bring a persuasive clarity to his account of Kelly's life."

"A unique and worthy inclusion in the ever-expanding Ned Kelly canon."

"The strip's studied period vernacular and antiquated design reinforce the illusion, capturing the appearance and tone of illustrated Victorian pamphlets. An accomplished draughtsman, Wedd effortlessly blends an expressive, cartooning style with intricate cross-hatching that emulates the look of 19th-century engravings. And he readily uses cinematic flourishes when the occasion demands, such as the exciting, impressively staged Stringybark Creek and Glenrowan set pieces. The latter vividly conveys the chaos, farce, tension and pathos of the confrontation. That he achieves this while observing the conventions of a serialised comic strip, with its recaps and cliffhangers, is testimony to his skills as a graphic storyteller."

ONLY 1000 COPIES OF THE FIRST PRINT RUN ARE AVAILABLE!   Ned Kelly is now distributed to many good Australian Bookstores by Dennis Jones and Associates. Or from this website. The LIMITED-EDITION, 200 COPY SIGNED EDITION has now SOLD OUT after a Feature Story by Sally Browne in the June 15th Edition of The Sunday Mail  lead to a run on orders from this web-site! The Limited Edition signing featured the signatures of Justin Wedd (as representative of the Wedd Family), Michal Dutkiewicz, Dr Adam Dutkiewicz, Ryan McDonald-Smith (all personnel who worked on the creative side of the book's production) and Nat Karmichael (Editor, Publisher). If you ask nicely, however, Comicoz Publisher Nat Karmichael (alone) will personalise your copy.
Limited copies left! Hurry! Print Run nearly exhausted!  ​NED KELLY, Narrated and Illustrated by MONTY WEDD -- WINNER Bronze Ledger Award 2015. 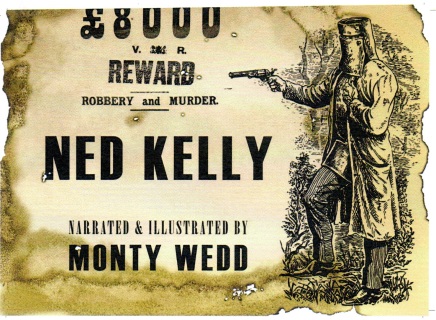 FIRST IN FIRST SERVED! The 200-copy Limited Signed Edition of this book has now SOLD OUT! However, Publisher Nat Karmichael will still personalise and autograph your copy (IF you ask nicely!) Please note: the First Print run is RUNNING OUT! Less than 100 copies remain!

This book won a Bronze in the Ledger Awards ("For Excellence in Australian Comics and Publishing"), held at the State Library of Victoria on April 10th 2015.

Any TEACHERS or LIBRARIANS out there? Or anyone Home-Schooling? This is a great book to teach students about our Australian History! 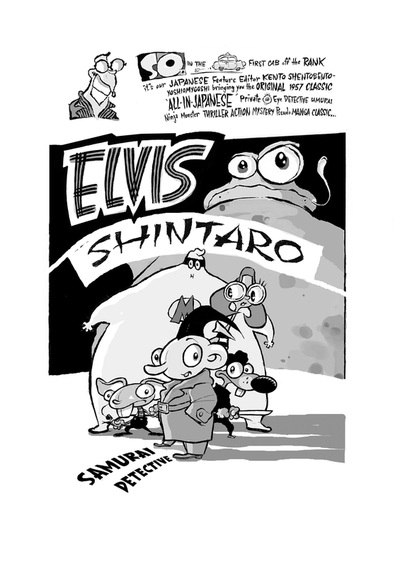 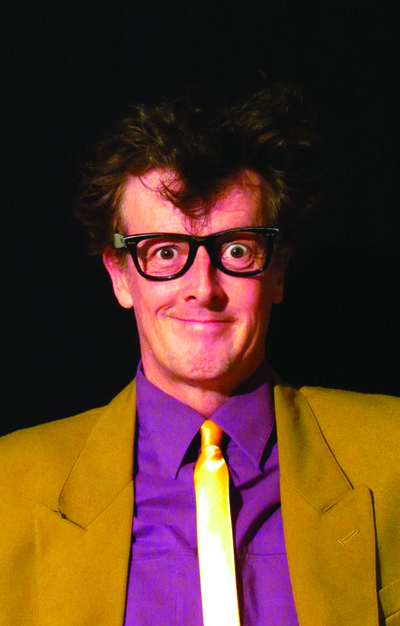 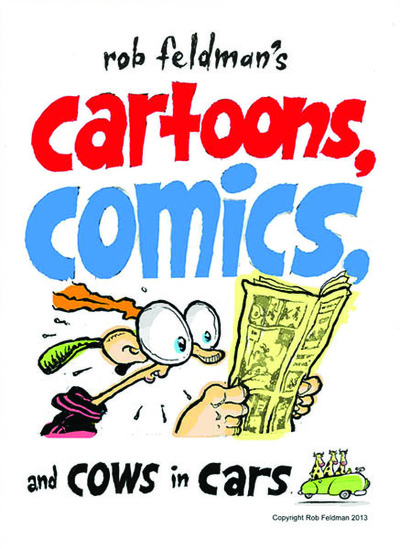 The book is about A4 size, with Case Laminate cover and over 130 black and white pages for all people who like to laugh, in the wonderful style of Leo Baxendale, Monty Python, and, um, well... in the style of Rob Feldman!
This book was entered in the Picture Book section of the Australian Children's Book Council's Awards for 2015. It didn't win. Who knows why.

Please Like Rob on Facebook. His page is called Rob Feldman Comics & Cartoons. This Illustration appears (in black and white) in Rob's book and is Copyright Rob Feldman, as are all other illustrations in this segment.
SOLD OUT! Rob Feldman's Cartoons, Comics, and Cows in Cars 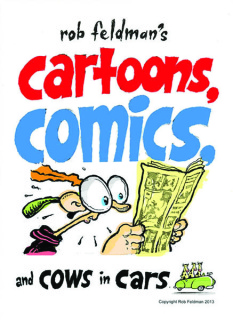 ​Sydney-based cartoonist Rob Feldman took almost two years to get this book prepared just for you. This is a hardcover, with 160 pages of wild cartooning, the like of which you have never seen before (and likely to never see again, if we can't sell copies of it)! Please note: the cartoons displayed are NOT all included in the book: but are left there as an ADDED BONUS, to give you an idea of the mania within the pages! If you are a Fan of cartooning buffoonery in the Monty Python or Leon Baxendale kind-of-way, you are in for an absolute TREAT! It will be worth every minute of your time to read it, to laugh over it, to savour it as comfort for life's trials*.

NOTE: Rob has drawn an all-new 5 page comic story in the AUSTRALIA! volume. His work also appears in Oi Oi Oi! Issue One and the Special Nostalgia Edition. 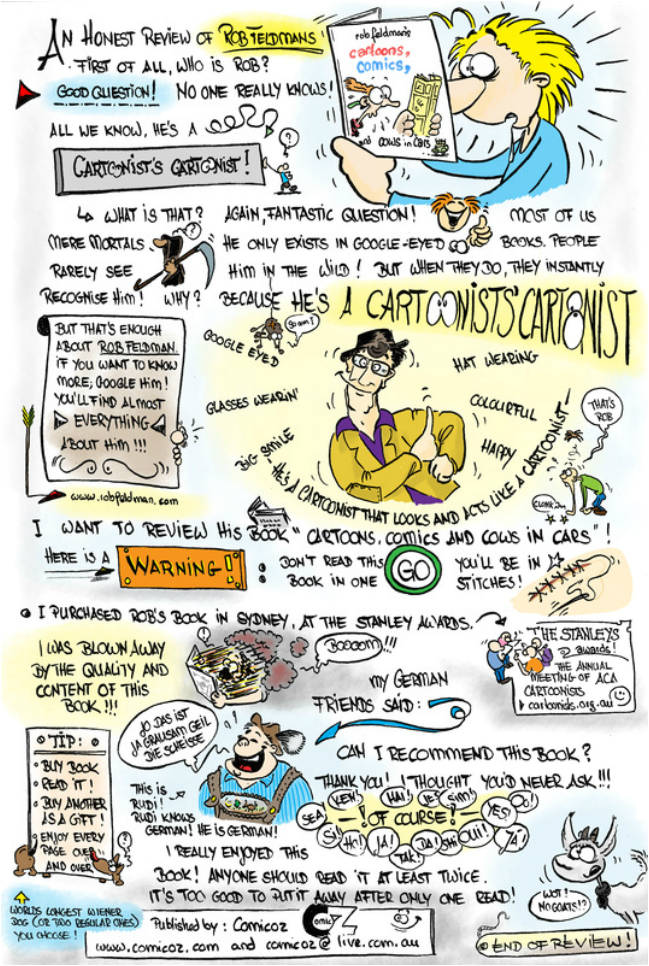 COMICOZ is now publishing a quality comic-magazine called Oi Oi Oi! It features all-new comic stories from a variety of Australian Artists and Cartoonists.  ALL works published are owned by the creative teams involved in their creation...AND are paid by Comicoz! If you are an aspiring or professional Artist and/or Cartoonist interested in submitting your work to an Award-Winning* anthology on-going quarterly nationally released comic magazine, please  click here....   The Sixth Issue is now available in all good Australian newsagents and comic shops, with a Seventh Issue now in preparation.  A Special Nostalgia Issue will soon be released to raise funds for future issues (see below for details). (There have been so many quality submissions, lately, that I have found great difficulty in deciding who to put in the next edition and who I must defer until a future issue! Even so, I am still looking for artists and cartoonists for future issues, so feel free to get in touch!)

Books may be purchased here, via our secure on-line store.    To purchase items listed here, click on the "Buy Now" tabs and this will direct you to our secure Payment site...   Comicoz is no longer looking into making any Air Hawk books available in PDF format from this website, or making them compatible with eReaders, at the request of the Copyright Holder...   However, copies of the Books in physical form are available.   Comicoz is still exploring the option of Ned Kelly, Narrated and Illustrated by Monty Wedd being available electronically some time in the future.   And Rob Feldman is still too busy looking at his new book, that I have not been game to ask him if he would like to see if it will one day be compatible with eReaders....!!

Only available for a very Limited Time, the Autographed Copy of Volume One (John Dixon, Air Hawk and the Flying Doctor) - personally signed by John Dixon, Eddie Campbell, Michal Dutkiewicz and Nat Karmichael - is now STILL AVAILABLE !    ONLY 200 signed copies were available...!!   (And now I have found some extra copies still here in the office!!)   This was a Special 200 Copy Limited Signed Edition. John Dixon sadly passed away in 2015, so this is a very rare (and your last) opportunity to obtain an autographed edition signed by John. Before long they will all be... gone... gone...and gone!!   This is really a Once in a Lifetime Historical Opportunity to obtain a copy of this book personally signed by Australian Comics Great John Dixon...    For those of you who already have a copy, please treasure it and ensure you leave it to someone you love in your Will!!

In the dim dark past of last century... (Well, between 1988 to 1990 in fact), COMICOZ published six issues of this magazine.   Sadly, we have no more copies of these now historical pieces available for sale....they have all SOLD OUT!!    If you are interested in reading these magazines, the National Library of Australian (in Canberra) have copies available for reading, and the Redcliffe Library in the Moreton Bay City Council area have filed their copies.... somewhere!   (I was not able to locate them when I recently went a-searching...!)
Google Analytics UA-139927741-1