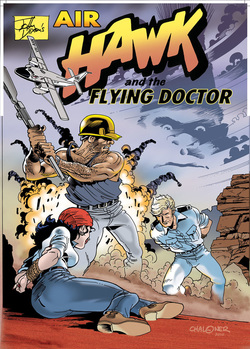 John Dixon's Air Hawk and the Flying Doctor:
A Third Volume or "The Best of..."
At this stage, I am still reeling from the loss of John (who passed away in early May 2015). I have 'known' John since 1980, when I started writing to him as a Fan. I plan to maybe make this Third book a "Best of..." Volume, rather than the sequential reprinting of the Air Hawk stories (which is how the First and Second volumes ran). But, I say 'maybe' because I have not yet decided what to place within the volume ....just yet. The plan remains, though, to have the book out, although 2016 is more likely the release date now...
Keep reading the "Comic Related News" Blog for an update on the news.... 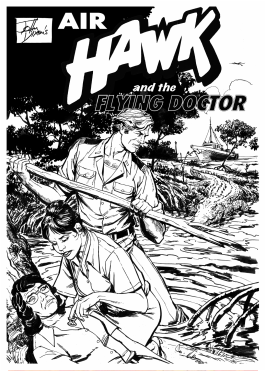 Featured in this Volume are the following adventures:


Also featured in the book:

Well, everything is just ready for you to order!
An article on the history of the real-life organisation, the Royal Flying Doctor Service  is featured
An Index of all Air Hawk stories (the Dailies) are listed


John's thoughts on the adventures published in this volume, including some of the inspiration for the stories were planned on being listed, but John's illness at the time made that impossible. Sadly.
John Dixon, Air Hawk and The Flying Doctor: Volume 1
A$
45.00
Google Analytics UA-139927741-1