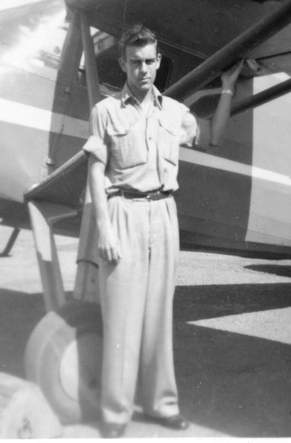 John Dixon, pilot
John Dangar Dixon was born in Newcastle, New South Wales on February 20th,1929.   With an interest in art, John moved to Sydney in 1945 and took a series of jobs with department stores and advertising agencies.   An acquaintance suggested he try the comic book field, and towards the end of 1947 he began a long accociation with comic publisher H. John Edwards.

He broke into Sunday newspapers when Air Hawk and The Flying Doctors made its first appearance in Perth's Weekend Mail on May 30th 1959.   It was followed by other Australian Sunday newspapers: Sydney's Sun-Herald, the Brisbane Sunday Mail and the Adelaide Sunday Mail.   The strip gradually increased its popularity and John Dixon was given the opportunity to commence a daily strip in May 1963.

Due to the detailed nature of the strip, John hired an assistant (Mike Tabrett) and trained him to take over the Sunday page, so he could concentrate on the daily strip.   (Unlike most US adventure strips, the Sunday and daily continuity on Air Hawk were separate stories - and John Dixon wrote them both.)   Other artists to work on the Sunday artwork included Hart Amos and Keith Chatto.   The introduction of the daily strip gave John new impetus as he polished and refined his technique, gradually removing all trace of the slicker comic book approach.

Of the Big Three (Foster, Raymond and Canniff), only Canniff had an influence on his style and even that disappeared: by the late 1960s John had developed a comic strip technique that was equal to any continuity artist in the world.   During AIr Hawk's run (to 1986), John's work was held in high esteem overseas, with the strip appearing in newspapers in New Zealand, Hong Kong, South Africa, Ireland, Italy, Spain, France, Germany, Sweden and Argentina. 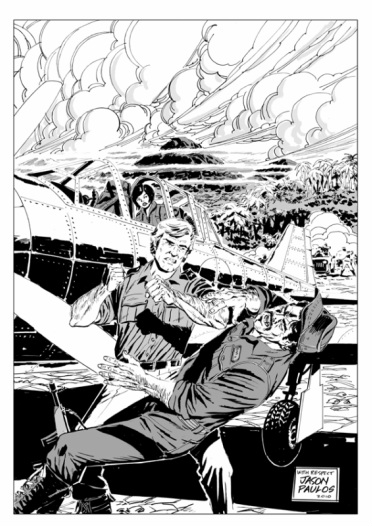 Air Hawk as seen by Jason Paulos
Initially, Air Hawk was the name of an air charter service operated by Jim Hawk, an ex-World War II fighter ace.   The charter base was in Alice Springs and they worked in conjunction with the Royal Flying Doctor Service.   Dr Hal Mathews was a close friend of Jim Hawk who worked for the RFDS and Sister Janet Grant belonged to the Australian Inland Mission, whose medical clinic adjoined the air strip.    In the mid-seventies, Jim Hawk was granted a franchise to supply a special Emergency Releif Unit.   The Unit's function is to relieve any Flying Doctor Base in need of assistance and to be available for special emergencies.   Hal Mathews had been seconded to work with the Unit and Janet Grant was now his full time assistant.   With the change in responsibilities, the 'Doctors' part of the title was reverted to the singular.

In 1986, John moved to the United States.   He painted for Defense and Foreign Affairs magazine, returned to comics for a short while (working on various titles for US publisher Valiant Comics and Secret Agent Corrigan for European publishers ), as well as working on story boards in the entertainment industry. John then retired, and continued to live in the US with his wife Sue.

In 2014 John was awarded the Ledger Award for "Lifetime Achievement in Australian Comics". In later years, John had developed a condition called Lewy Body Dementia, and passed away on May 7th 2015. He is a sadly missed friend, but his legacy lives on in the wonderful characters he created. If you would like to send his wife Sue Dixon a letter or card, please write care of the Comicoz address:

Material and information used on this page has been obtained from various sources, and Comicoz acknowledges their assistance, co-operation and permission to use the said material.   They are (in no particular order): The Family and Friends of John Dixon for the photograph of John as a pilot, John Dixon and the Family of (the late) John Ryan for the information used in the Biographical and Historical text, and Jason Paulos for his unsolicited artwork and interpretation of Air Hawk.
Thank You one and all.   Air Hawk and the Flying Doctor, as mentioned earlier, remain Copyright John Dixon...
Google Analytics UA-139927741-1